Not many are aware of the actual meaning or the way to celebrate Maha Shivratri. On the specific night of Shivratri, the planetary placement is such that there is a natural tendency for the kundalini energy, housed in the chakra at the base of the spine, to rise up and reach the chakra at top of the head. On the night before the new moon in the month of February or March, the Night of Lord Shiva – Maha Shivratri – with utmost spiritual significance is celebrated.

Although the Shiv Purana gives the legend of the origin of Shivratri – the day in the month of Agahan and constellation of Ardra, Lord Brahma and Lord Vishnu accepted the superiority of Lord Shiva after they were unable to find the ends of the pillar of fire, which Shiva had transformed himself into – it clearly outlines the methods to celebrate this sacred night.

It is said that the yogic tradition – not only the one with asanas, but also the path of the self-realisation – began from him. Thus, Maha Shivratri is celebrated in various forms depending on the perspective. The worldly person celebrates Maha Shivratri as the anniversary of Lord Shiva and Goddess Parvati, while the spiritual person looks at this day as one when Shiva attained victory over all of his enemies.

The below mentioned sms/shayari are meant regardless of any stage. So, what are your looking yet? Scroll down and get your dish to greet your family, friends, neighbours, relatives. 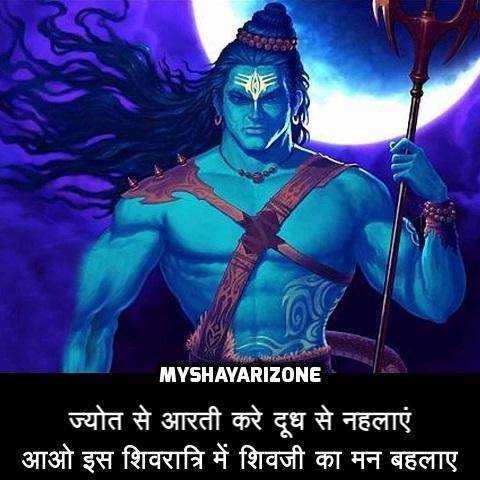