Independence Day is annually celebrated on 15th August, as a national holiday in India & the official celebrations would take place at Red Fort, Delhi. Our country attained independence & broke free from British colonialism after centuries of struggle & countless sacrifices made by freedom fighters.

The day is celebrated with great zeal and enthusiasm across the country. Schools, colleges and offices hold grand cultural events and people come together to pay homage to the freedom fighters and legends who valiantly fought for the country. People hoist tri-color flags, sing national anthem and fly kites to celebrate the day.

The story of India’s colonialisation began with the arrival of the East India Company to the country in 1600s. The merchants who came to trade in India, soon started to exercise military and administrative control. Due to their massive military strength, they started to overpower and suppress the local kingdoms, and ruled some parts of the country. By 1757, they had established their foothold in many parts of the country.

The unfair rule led to widespread resentment among the country men, and local populace began to revolt against them. The first organised revolt took place against the British rule in 1857. A group of Indian soldiers rebelled against British rank in Meerut. Referred to as the Great Struggle of 1857 or the Sepoy Mutiny, this marked the beginning of a new era in the country’s freedom movement.

The very next year, the British Crown in London took over the direct control of India. From 1858 to 1947, the country was governed by Britishers with representatives in the forms of governor-generals and viceroys posted in almost every state. With humongous discrimination towards Indians in their homeland, the situation kept on getting worse.

On 13th April 1919, Jallianwala Bagh massacre, also known as Amritsar massacre took place. People had gathered at Jallianwala Bagh in Amritsar, Punjab, to protest non-violently against the arrest and deportment of two national leaders, Satya Pal and Dr Saifuddin Kitchlew, along with Baisakhi pilgrims. Many of them had come from outside the city and were unaware of the imposition of martial law that prohibited gatherings at public places. However, General Reginald Dyer ordered troops to fire machine guns into a crowd of Indian protesters and killed more than a thousand people. This led to Non-Cooperation movement spearheaded by Mahatma Gandhi to protest against the incident. Protestors refused to buy British goods and decided to purchase local handicrafts and picket liquor shops.

In February 1947, British prime minister Clement Attlee announced that his government would grant complete self-governance to British India by June 1948 at the latest. The new viceroy, Lord Mountbatten, advanced the date for the transfer of power, believing the continuous contention between the Congress and the Muslim League might lead to a collapse of the interim government. He chose the second anniversary of Japan's surrender in World War II, 15 August, as the date of power transfer. However, independence came with the partition of India into the dominions of India and Pakistan.

The Constituent Assembly of India met for its fifth session at 11 pm on 14th August at the Constitution Hall in New Delhi. The session was chaired by Rajendra Prasad, the first President of India. In this session, Jawaharlal Nehru delivered the famous Tryst with Destiny speech and motivated millions of Indians. Here’s its extract…

“Long years ago we made a tryst with destiny, and now the time comes when we shall redeem our pledge, not wholly or in full measure, but very substantially. At the stroke of the midnight hour, when the world sleeps, India will awake to life and freedom. A moment comes, which comes but rarely in history, when we step out from the old to the new, when an age ends, and when the soul of a nation, long suppressed, finds utterance. It is fitting that at this solemn moment, we take the pledge of dedication to the service of India and her people and to the still larger cause of humanity.”

The below mentioned sms/shayari are meant regardless of any stage. So, what are your looking yet? Scroll down and get your dish to greet your friends, family, colleague or every people of our nation. 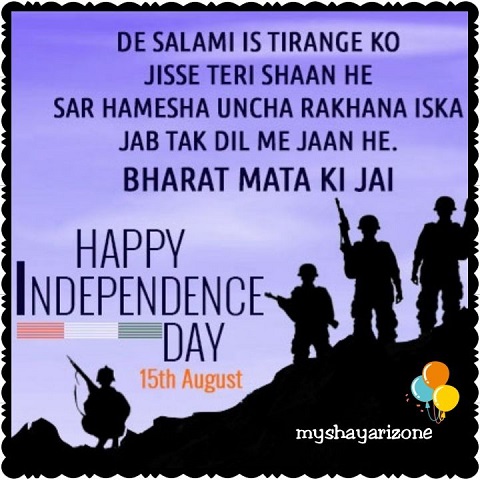 You can find Hindi Shayari Poetry SMS, Whatsapp DP Status, Wallpaper Image for every mood or emotion - My Shayari Zone