WhatsApp has submitted a new update through the Google Play Beta Program, Group admins can block members from sending ‘Frequently Forwarded’ messages. Here’s everything you need to know about WhatsApp’s new feature.

It’s worth noting that the new features, “Forwarding Info” and “Frequently Forwarded”, haven’t been rolled out yet to end users but have been spotted in the recent beta versions.

According to WABetainfo, a website that tracks WhatsApp updates, the next beta version of WhatsApp for Android comes with a new setting in groups that allows users to block “frequently forwarded” messages in a group.

Note that the new privacy setting will be visible only to group admins who can choose to block messages that come with frequently forwarded messages label. With the feature activated, none of the members in a WhatsApp group will be able to send such messages. 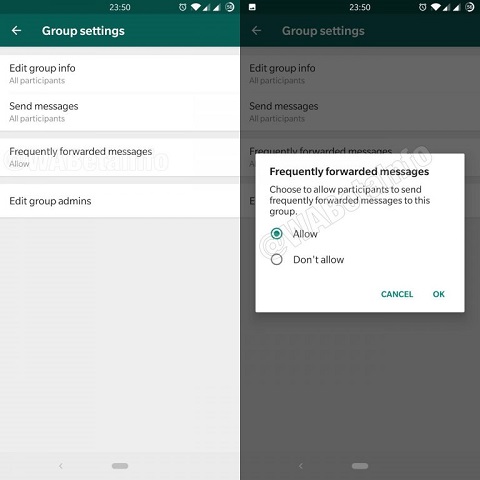 As you can see in the above image/screenshot, The feature may help WhatsApp stop spread of misinformation but it’s not completely foolproof. For instance, a user can simply copy and paste a “frequently forwarded” message and send it as a new message. The “frequently forwarded” message label will appear when a message has been forwarded more than four times. Currently, WhatsApp allows one to forward a message up to five chats.

The latest update comes shortly after WhatsApp rolled out a new privacy feature for its group users. Now, users can prevent others from adding them in a group without their consent. WhatsApp also gives the flexibility to change it to “nobody”, “my contacts”, and “everyone.” Here’s how WhatsApp’s new privacy feature works.